Part 3:  Hall’s Saddle to Waterworks: A rivulet’s point of view

I was strolling a high contour,  the tiny cluster of houses at Finger Post on the far side of the valley.  Far below, the rivulet flowed beneath the forest canopy in the Turnip Fields valley and as I walked I tried to hold its presence in my mind. 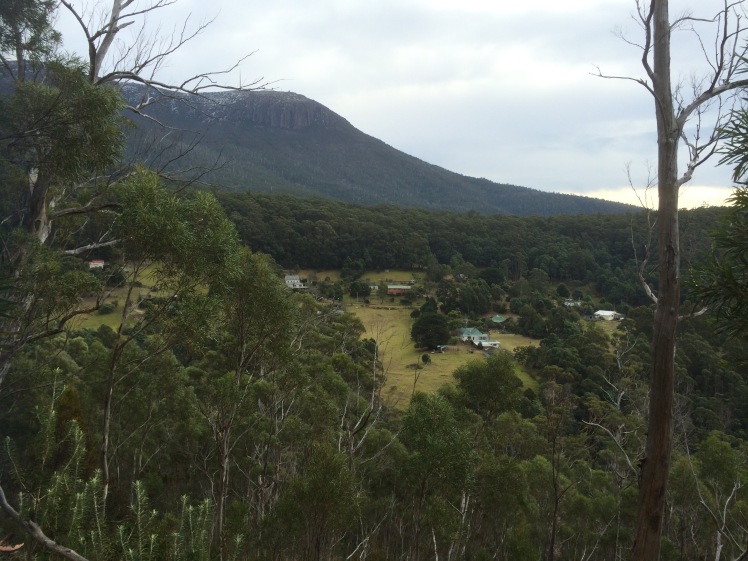 The houses on Huon Road hove into sight and the  Derwent River in the distance.  Gracious eucalypts beside the path had bark I had to stop and admire, she-oaks, orange banksia in blossom, and closer to my feet the tiny red flare of epacris impressa.  I was relishing my solitude, enjoying the rhythm of my stride but making slow progress – there were a lot of little water courses I kept stopping to examine.  Alone with my thoughts I faced the same question with the rivulet that I’d had when walking above Mitchells Beach on the South Arm Peninsula:  how close must you physically be to something to be actually walking  it?  And in what way can you be said to be walking something when you don’t know it’s there?  (I was thinking particularly of rivulets in the city and how, walking down a road we are most of us unaware that a rivulet might be flowing beneath us, imprisoned in a drain.) 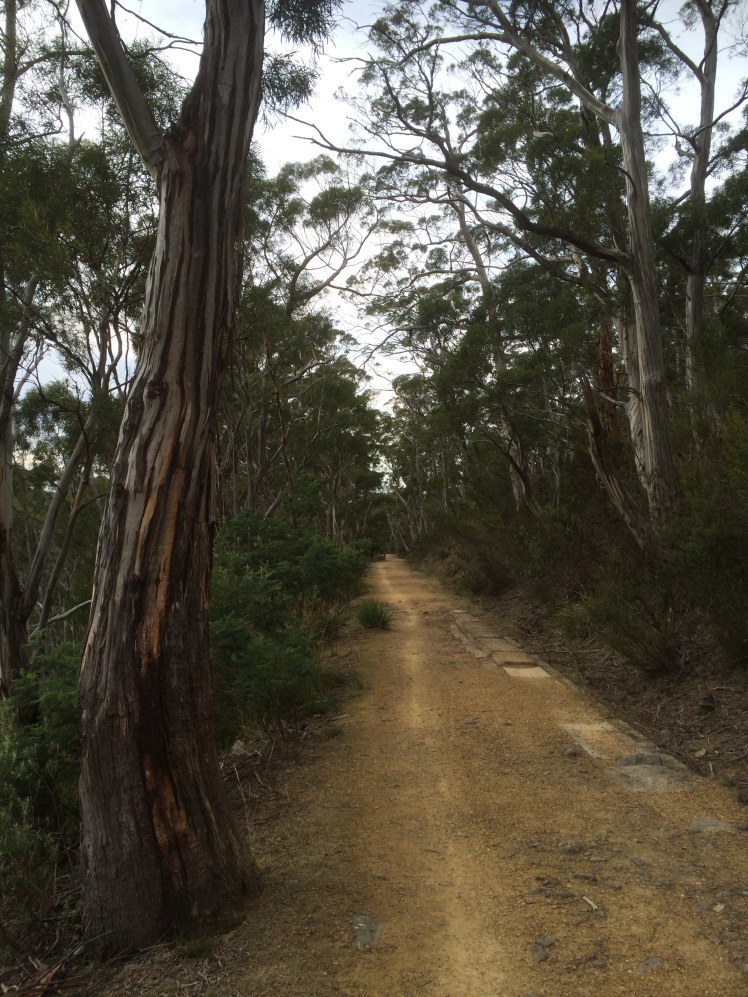 I reached the abandoned paddocks of McDermotts Saddle, the lumpy land that bears old traces of a building.  Superb blue wrens flitted ahead of me and a raven called lazily.  A little while later I got a view of dark water down at Waterworks. I came to the steps and descended, then lingered.  Gentle Annie Falls and a series of cliffs demanded exploration – their’s is a long quiet dreaming up here in the eucalypt forest.   Contemplation over, I followed the Circuit track, paused again at a poignant memorial seat to young life cut short, then finally arrived down at the rivulet at last, just where it emerged from the forest running small and shallow, slightly cloudy, over its dark forest bed, a stride wide, meandering around boulders.  I walked beside it companionably, stopping to capture its voice at a cliff and again where it runs over pebbles.

Shortly after this I had a choice of path but the rivulet had none. The rivulet is tricked as soon as it enters Waterworks,  apparently for the misdemeanour of flooding (or landscape building, depending on your perspective) in earlier days.   It is  sneakily led into a moat that runs around the reservoir to the right while the usurper, the reservoir, inhabits the bed the rivulet made like a gigantic cuckoo’s egg.

I could have walked beside it, commiserating, but having been that way so many times before (the bitumen, the picnic tables), I went left and walked a forest trail.  As usual the gulls were hanging out on the water and when I crossed over between the upper and lower reservoirs  there was a raven grubbing for food, some tassie hens, ducks and plovers. Munching on an apple, I rejoined the disheartened rivulet as it moved unwillingly down its moat, squeezing itself into the very centre as though it didn’t really belong there.  I passed a bbq in action and a couple arm in arm enjoying the view.   Two ducks, flying low, winged pass me on their way up to the top reservoir and as I approached the gate I spotted the first exotic plants: an escaped agapanthus.  It was a harbinger of things to come.

Displaced rivulet: the ecosystem blanks out. No life to foster, no landscape to build