Continuing the Journey Around Ranggoerrade: Heading for Dru Point

I drifted out of Stinkpot Bay and paddled north.  As I approached a corrugated metal boat shed the ‘owner’, a seagull, flew above me, screaming  warnings, while using a novel approach to keep me at bay.  Not wanting to take a direct hit, its missiles hitting the water beside my kayak, I paddled  around the point, somewhat aghast, aware that the alarm had now been taken up by two plovers, who joined in the shrieking then quickly shot off, careful not to fly beneath the heavily loaded gull.

Birds of the North East Corner

The bay shallows out up here and I found myself  in just a few inches of water . When the tide is out, I figured, this would be an expansive stretch of muddy sand but it was tricky to determine whether it really constituted a beach.   I floated past Villa Howden, just visible between trees. Three pied oyster catchers were hanging out on a rock, and I was kayaking like a handfish, my paddle useless now because it was so shallow.   If I’d had to get out I’d have sunk into the unforgiving mud.

Then I was back along cliffs, different layers of rocks sandwiched on top of each other, a little unconsolidated, and the water a little deeper now so that I could go closer in. Three pied oyster catchers, presumably the three from earlier,  were now lazing companionably on a slipway and a cormorant was snoozing on a buoy close by. One of them emitted cautious alarm calls about my arrival* for the cormorant’s benefit and I watched her rouse herself and start looking around frantically as I floated  by, not conscious of my presence.  Still unable to determine the danger, she departed in a rush anyway, but the oyster catchers, calculating my progress,  followed in a more leisurely fashion a while later.

I was ready to turn west.  The beautiful serenity dissipated because I was close to the Channel Highway.  There were paddocks and then Margate itself, but the shape of the watery world was entrancing, full of rushy islets separated by shallow channels and in them the water was still.

I took a punt on the third channel, heading along with my rudder up and spotted the North West River entering the bay.  I’d walked to about this point in the virtual company of my sister  several days earlier, and from her different continent she’d enthusiastically told me discomforting stories of misadventure that had me looking over my shoulder as I navigated the lonely muddy shoreline beneath the park’s deserted cliffs.

On that day that I walked with my sister’s voice in my hand, I’d passed the playground, walking along a tendril of beach sand and then along dark cobbles with oysters glued to their sides and then along stretches of succulent salt marsh. 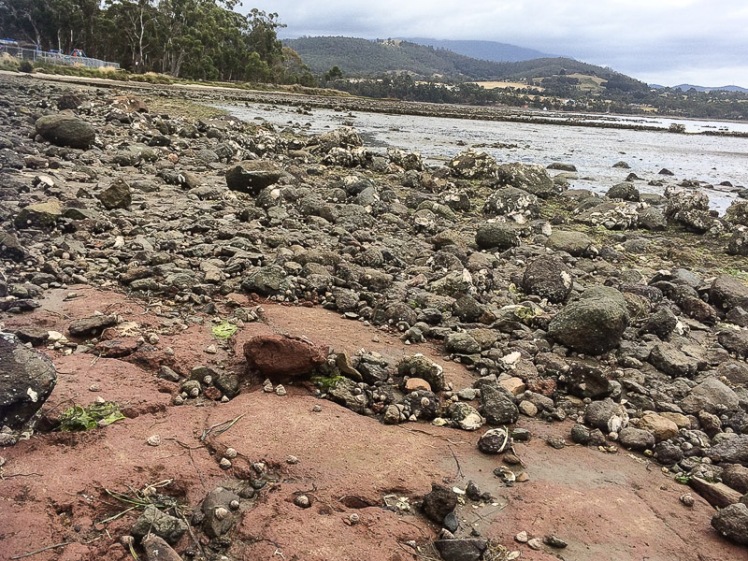 I’d negotiated exposed rocks in dark mud and heard a chorus of tiny noises that I think came from the invertebrates living down muddy tunnels, and I’d seen a grey heron, no doubt one of the two I’d been watching on this kayaking trip.

I’d expected to see a vibrant range of birds from my kayak but even in the less well frequented parts of the bay this was  not the case.  Seagulls were the most prolific; I saw twelve, but no sign of the penguins that hopefully still inhabit the bay.

The water beyond the river mouth was glassy and a whole lot deeper in these tussocky channels.  I encountered three pairs of black swan and two pelicans (probably the same ones I’d met on my walk) and then I turned south west to head  around Dru Point. A lone pied oyster catcher watched me go by.

The heron reappeared while I was kayaking briskly over more oyster laden reefs.  There were people near the jetty and the boat slip and the sea breeze had just begun arriving.  I made a dash through the moorings  and raced along to my arrival point, the most western beach along the Dru Point road, a muddy little thing frequented by ducks.

Although I was stoked and keen to continue the geo had the final say: ‘Enough,’ he said. ‘You can kayak the rest another day. ‘  It seemed a reasonable request.  The trip had been sublime. It had taken four hours, but had felt like only one. I just wasn’t sure when I’d get another chance to come paddling on Ranggoeradde.

*I try to adhere to ethical birdwatching guidelines.

What my kayak and I discovered in Ranggoeradde [North West Bay]

The Tortoise and the Elephant

And so I left vibrant Tinderbox Marine Reserve behind me and turned into Ranggoeradde,  better known as North West Bay. Calling it by a name so redolent in history restores something of its original character, despite the fact that it has been stripped of its myths and stories and the people who told them aren’t really recognised anymore.

A lot may have been lost in  translation.  It’s easy to withhold, mislead, confuse or misunderstand when it comes to words and their meanings, particularly when the relationship between the teller and the person with the quill is untrusting, or uncertain at best.  Ranggoeradde may not have been properly translated at all.

It’s a low energy embayment of about 2,000 ha. and it now  lay spread out before me.  It’s eastern shore is also the western shore of the Tinderbox Peninsula and it’s easy to forget this as you wander about this area.  There’s a long winding road that feels its way down that particular edge of the bay, past a number of Howden houses set in big blocks of land, a couple of small bays (somewhat muddy) and a bus shelter that doubles as a local book exchange or perhaps a community library.  It’s a good road to cycle but it’s still on my ‘to do’ list.  It’s a good area to walk too, and on this eastern side there are three spots of interest:  Wingara, Stinkpot Bay and the Peter Murrell Reserve, and I was heading to Wingara to catch up with the patient geo. 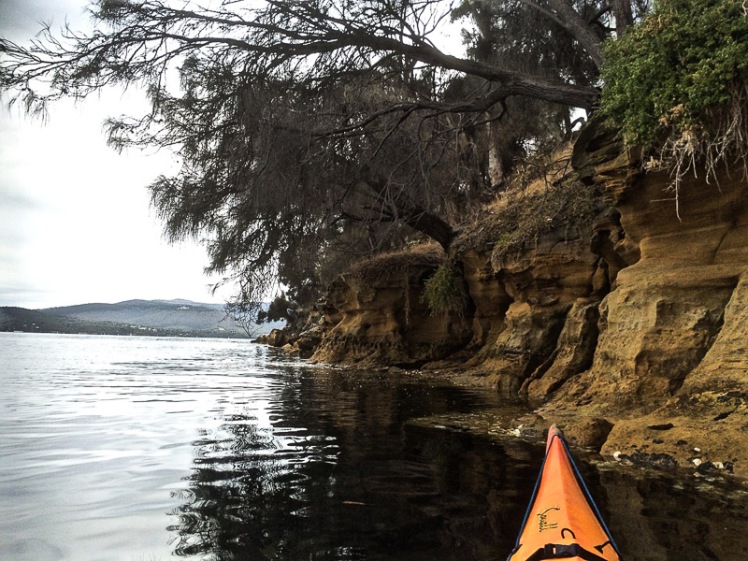 The further I went into the bay, the more I noticed that diversity beneath my kayak  was diminishing, and I realised that this bay is like a tortoise trying to support an elephant on its stoic little back.  It carries the suburb of Howden, the country towns of Margate, Electrona and Snug, as well as Conningham, where shacks along a short series of sandy beaches now make up something of a commuter suburb.

The North West River plummets down the southern slope of kunanyi (Mt Wellington) and when it happens to be dry its bed gleams with large, pale boulders and when it’s in flood it’s strength is so awesome your breath catches.  It enters Ranggoerrade, and so does the lovely Snug Rivulet, hugging its secrets to itself in a dreamy sort of way, a perfectly beautiful miniature estuary.  They, along with various rivulets entering the bay, carry local litter, grey water, toxins and the like.  That’s more than enough,  but there’s a fish farm here that ups the nutrient load, a bit of light industry (pre-cast concrete and glazing), a seafood factory and a marina, moorings and a boat yard as well as a sewage works. (Jordan et al. 2002) as cited here.

It wouldn’t take me long to reach Wingara, I figured, but then I saw the sandstone cliffs and my speed slackened off again.  They were stunning and I got snap happy.  Never high, they sloped downwards, eucalypts and grasslands above, and gave way to a cobbled shoreline.

Andrew Short (2006) doesn’t mention beaches on this side of the bay in his inventory of Tasmanian beaches, and I had flipped my strategy for exploring beaches.  Instead of high tide, for the D’Entrecasteaux and kayaking I wanted high tides, expecting mostly muddy shores.  That’s why, on this trip, I sometimes floated above beaches drowned by the tide and gazed at ancient ones laid down in the sandstone’s stratigraphy.  I came to a cove with  a private beach and tried that lifestyles on for size.

It was as I paddled along the shoreline beside the fish farm that I really noticed the decline in seagrasses and seaweed. From the fish farm and that first house on the shore, it became less interesting beneath the water but the cliffs were awesome. Sometimes I had to go out a little wider to avoid the ‘bommies’. Occasional the kayak scratched as I went over them in too shallow water. I was constantly lifting my rudder.

I negotiated the fish farm and the Wingara jetty, passing cormorants holding their wings out to dry.  The geo was standing on the rocky platform staring at the cliffs.  So far, it had been an absorbing paddle, but I thought how westerners accuse some of the cultures amongst whom they’ve settled their flagpoles of not planning for tomorrow. We haven’t necessarily recognised that actually, we are the ones that haven’t planned for tomorrow in the most significant of ways.  We’ve used up ecosystems like their isn’t going to be one.  We’re the destruction and destruction doesn’t give a damn.  That’s why all around us there are tortoises balancing elephants.

A little more about this tortoise and that elephant:

The State of the D’Entrecasteaux Channel and the lower Huon Estuary report (Parsons, 2012) states the following about North WestBay: