The sailing season officially opened last Saturday, the 10th October and Hobart’s recreational sailing fleet turned out in good numbers for the annual sail by  the Governor’s vessel Egeria, moored in Sullivan’s Cove.  Some boats adorned themselves in nautical finery.  We forgot to take off our fenders but by the time we realised this we were relaxing at the rendevouz off Nutgrove Beach and having imbibed a wine or two were feeling too mellow to care that we had not kept up appearances.

The geologist and I had invited three friends along, one an able seaman of the four legged variety, our sole adornment in his coat of yellow.  The sky was blue, the sun shone and there was a breeze strong enough to fill sails.  As this was the first time I was skippering on an opening day we stayed on the edge of the fleet, detouring under the bridge, confusing ourselves over the instructions until order was established in the fleet. We snuck in towards the rear, trying our best to keep ahead of the  Beneteau and MONA cat bearing down on us as we headed into the tight conditions in Sullivans Cove, more alarming last year on a larger boat.

We dropped our anchor at the back of the fleet, by now mostly rafted up together off the beach, and I lined us up with a group of large boulders off Maning Reef, clearly much loved by cormorants. The tide was low and the coastline had a surprise for me. Lords Bay had spread itself out. It wasn’t a little beach at all but a long, thin sandy beach running along the back of Maning Reef all the way to Red Chapel Beach, validating my belief that in earlier days this coastline was one long stretch of sand, at least between Short and Long Beaches, if not beyond. As we drank wine and picnicked and the talk turned to rugby, I discussed its changed appearance with E who knew this stretch in all its variations better than me.

Later I quizzed a friend who lives above this beach for a bit more information, and then, when the tide was low yesterday afternoon I went walking, hoping to find bouquets of sea tulips waiting for me on the jetty pilings.

And here’s the thing. I didn’t find a single one, but I did find numerous other little squirts who looked remarkably like pyura Doppelgangera and squirted just to show me how it’s done.

Despite their name they hadn’t contrived to look anything like the elegant sea tulip I was beginning to believe I’d conjured up. They’re squat, rotund, pustular and a mucky colour, probably impeccably beautiful for blending into their surroundings but a challenge for the human eye to appreciate aesthetically.  A Tasmanian native, it’s well travelled, having hitchhiked on boats since ships first came here, making a pest of itself in New Zealand and the mainland.

I walked on, from stormwater drain to jetty piling to rocky outcrop musing about what it really was I’d seen on the hull. Had it really had a stalk? Had it even been red? Chances are it wasn’t a tulip at all but one of these doppelgängers given they are particularly captivated by artificial structures, according to the literature.

While thinking about how dramatically we have changed the ocean and the locations of its denizens,  I located Maning Rivulet (I think) which gave me a small thrill.  As I reached the little cove I’d seen from Samos when sailing with my friend the sky filled with tiny floating seeds like small white butterflies.  They made drifts on the sand and  laced  the rock pools, and the next day, around in New Town, the same phenomenon took place beside New Town Rivulet and I saw that they came from tall graceful trees whose name I still need to find out.

Here are some more photos of the Maning Reef section of the walk that I took with my trusty iphone 5s.

They’re in no particular order. 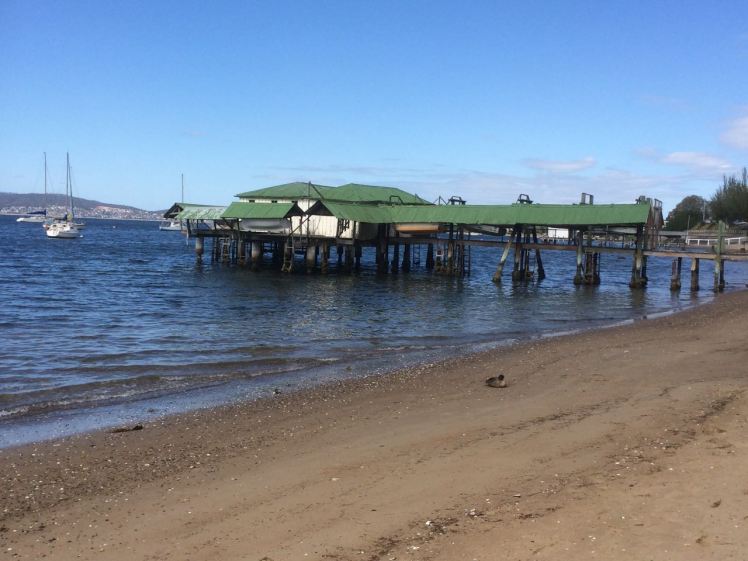 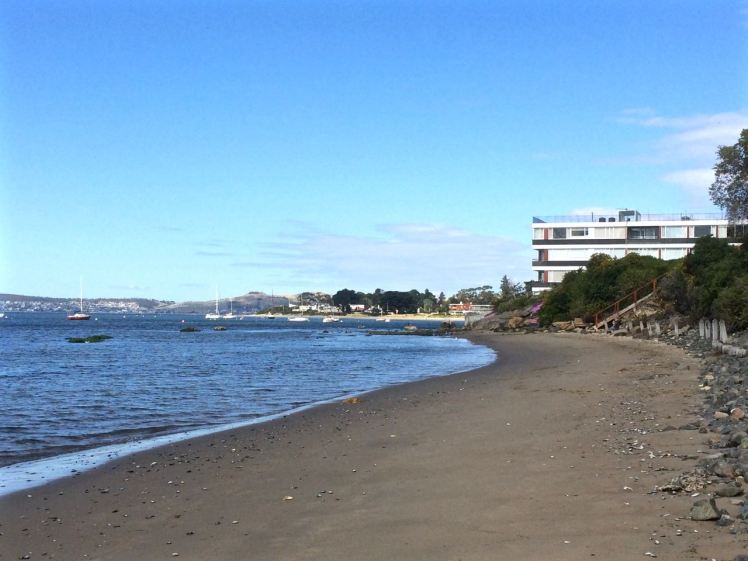 It’s One for the Birds

In the little nook on the south side of the casino there’s a small, intimate curve of sand that survives despite the development around it. Because it’s below the seawall drivers lost in their own thoughts can overlook its presence. There’s a gate with a Parks and Wildlife sign beside it. No dogs are allowed, and I think perhaps there should be no gate there at all because I’ve gates to beaches are sometimes left open by the careless, making seabirds like penguins vulnerable to attack.

According to Short (2006), this beach was continuous with Short Beach long ago, which means there was once sand around Wrest Point (hard to envisage). Given that early settlers mentioned sea level rise they’d witnessed, this may have been the case although my hunch is that there were some cobbled strips and these days at least, it’s more continuous with beaches to the south.

One day when the weather was still warm I went down to the marina to work on the boat and the dogs came with me. Afterwards we walked along Marieville Esplanade, past the casino and around the corner to Lord’s. I tied the dogs up at the fence and went on down the path. I felt I was encroaching – the owners had risen as one and moved out onto the water. There is a bench. I sat on it as unobtrusively as possible. Around me there were footprints and all of them belonged to ducks.

In the afternoon much of this part of the beach lies in the casino’s long shadow. The view up river is blocked by Wrest Point but there’s a longer view across the river and down the estuary, and in the foreground there’s the much photographed jetty with its boat house as well as a cluster of yachts on their moorings. Out a bit further, the casino buoy cleared, we often turn the yacht into the wind and hoist the sails.

There are actually a couple of buoys in this vicinity that the Derwent Sailing Squadron and the RYCT use for the combined club races. As well as the green Casino buoy just off Wrest Point, there’s the DSS permanent further offshore and the Manning Reef buoy, sometimes camouflaged by moorings.

I’ve sailed past this beach many times, and cycled above it on lazy summer rides from the Cenotaph to Hinsby Beach, Taroona but one summer a few years ago, feeling particularly free on a week day, my friend and I walked north from Long Beach further south.  The tide was low, but there were some rocks and bits of branch we had to navigate. And this is the thing – you can come to this beach and think that it’s a tiny cove. It isn’t. That little cove is like the bloom of a lily and its stem is a long slender tapering of sand and rock. Jump onto Google Earth and take a ride from the tiny deltoid mouth of Sandy Bay Rivulet south along the coast. You can see clues as to what was there before, you can deduce that older shoreline, marvel (with some concern) at the myriad changes.

Really, the only distraction on the beach is the sound of traffic coming from the road above so if you feel a real urge to come here, bring earphones and relax to music – and bring a bag for litter collection. Picking up the odd cigarette stub or plastic wrapper is a nice way to reciprocate the avian owners for tolerating your inconvenient presence.

The Lords were once the wealthiest family in Hobart, made good from a convict beginning. James, sentenced in York, arrived on the HMS Calcutta in 1804 and quickly grew rich trading in illicit grog. Goc (1997) describes him as a ‘Bobby Shaftoe’ dressed in knee breaches and silver buckles. He and his sons became large landowners in Sandy Bay and bought the Chaffey’s Land, lending their name both to the beach and to Lord Street not that far north from Wrest Point.

But that day last autumn, while my dogs stared down at me feeling cheated, I envisaged the cultivated fields of the New Norfolk settlers and like the Mouheenener children before them, the Chaffey children and others playing on the sand and exploring Manning Reef. Car traffic faded, the road was dirt once more and the Canadian political prisoners on their unsteady legs, plotting their escape, were road building, there was the foot travellers, the odd person on horseback, the sounds of farming and land clearing as well as the odd shot – which would have to be the Rev Knopwood bagging pigeons. Out on the river I imagined a tall ship, whales breaching, gannets diving, and on a light south easterly breeze, the conversation of penguins carried towards me. 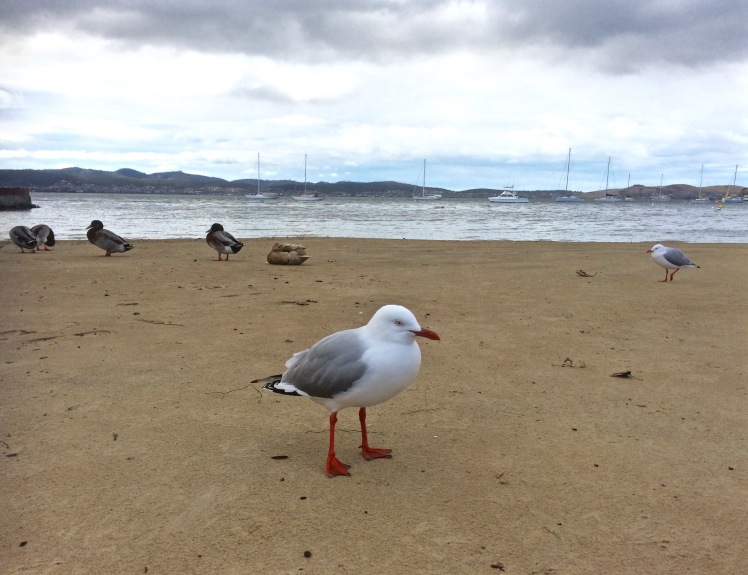 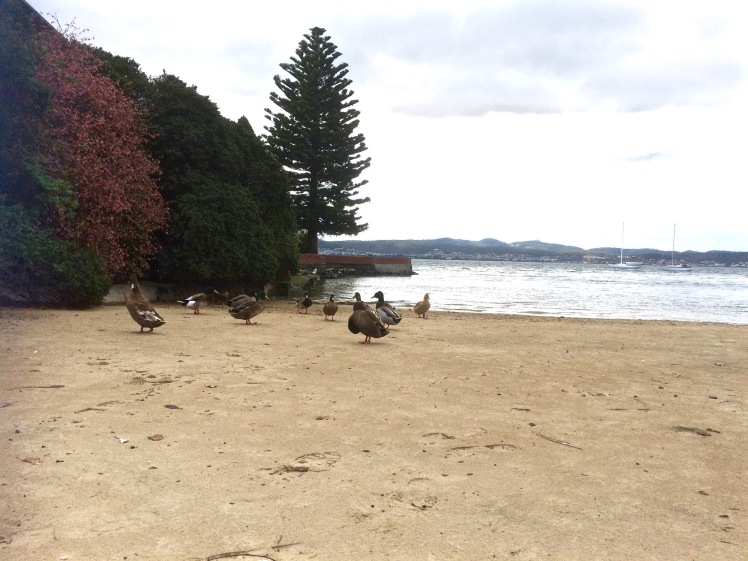