The Birds And the Beaches

Last October I was at Eumarrah, Hobart’s oldest wholefoods shop, when I bumped into an acquaintance I hadn’t seen in quite a while. It so happens that we are both interested in the environment, and birds in particular have been a long and avid interest of his.

I was keen to find out his take on my observation of low bird numbers around the Derwent’s shores, be they on the western or eastern side or in Ralphs Bay, that beautiful low energy embayment near the mouth of the Derwent, these being some of my current stomping grounds. I had also walked ocean beaches with this concern uppermost in my mind and actually, it was while writing this now in my little mountain study, that it dawned on me that  there used to be a flock of seagulls that flew over our ridge en route from North West Bay (we used to assume) to the tip in South Hobart. ‘ When had this stopped?’  I asked the geo. ‘The sight and sound of them used to be part of the daily rhythm up here.’

‘I reckon they stopped flying over about two years ago,’ he said.

Two years for us to notice a pretty obvious change in our environment.  That’s sobering.  The only large flock I’ve seen since I started my walks has been at the dirty little mouth of New Town rivulet but perhaps I have not been focussing on gulls sufficiently because today, sailing Samos into Sullivans Cove just as the cold front arrived with a blast, I noticed a fair number perched on the roof of the new Institute of Marine and Antarctic Studies building and there was also a small flock at the Wrest Point casino.

It’s easy to assume that these birds, long considered the rats of the sea, are safe from our abuse of the environment… but what if something sinister is going on right under our noses that we are not aware of? And what if the seagulls are not as robust as we once thought? Of course, there could be some perfectly simple explanation. Down at the tip they might have introduced a management practice to stop scavenging seagulls from spreading toxic debris along the shorelines. Certainly, some councils have waged war on them (see links below).

Gulls and cormorants are also regarded with trepidation by those sailors who have boats on moorings. I have a couple of friends who have been most unhappy to discover a seagull after party mess on their yachts.  Some people resort to nautical scarecrows, profiles of eagles, plastic bags and webbing. Take your eye off your yacht and this is what happens. 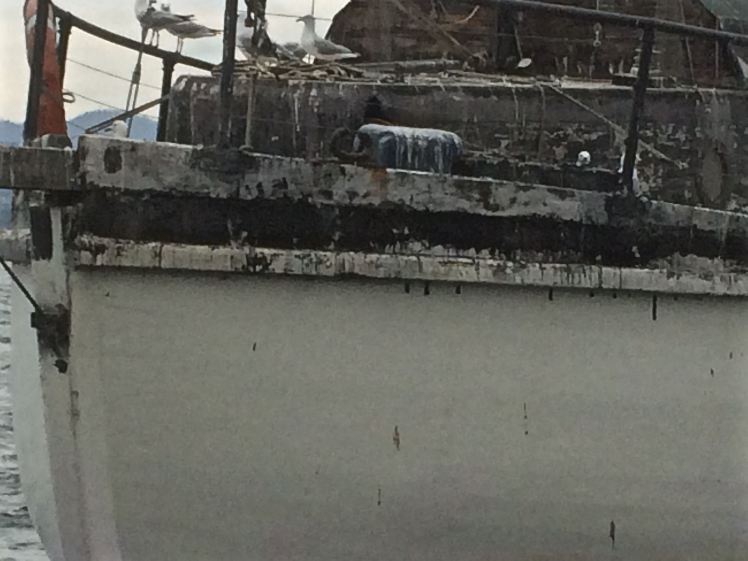 Anyway, this man so knowledgeable about all things avian, was kind enough to let me record our talk and so here are some of the points he made during the course of our long conversation.

Shorebirds are in decline. Some natural causes include high tides washing away nests. When you think about the more volatile oceans and weather we’re getting with climate change and the way dunes are being hammered by sea level rise, this would be headline news if birds like little penguins and short tailed shearwaters produced newspapers. Native fauna like quolls prey on birds too.

I could add my own examples: go out to Chappel Island in the Furneaux Group off Tasmania’s north eastern coastline and you can barely put one careful foot in front of the other without stepping on the snakes that prey on the short tailed shearwaters that have their southern summer burrows there.

He cited more examples and based on what he had to say I suggest we all go and peer at ourselves in the mirror because the main cause is our lack of restraint in the way we behave around beaches.  Some locals  walk straight through the plastic fences that councils erect on dunes to safeguard both nesting birds and eroding dunes. People camp on beaches, dunes, or just behind them. Radios blare, kids race about on quad bikes and dirt bikes. Adults in four wheel drive vehicles mistake dunes for playthings, crush nests and mess with the role of dunes as a barricade against the sea.

‘When this sort of thing is happening on remote ocean beaches,’ he said. ‘You know there’s no haven.’ And he mentioned a researcher dissecting a bird on Lord Howe Island, (a tiny speck in the ocean 600 km off the Australian coastline) and finding it chock full of plastics.

‘ And over fishing, acidification of the oceans, the warming seas,’ I said.

He had begun talking about birds, like oyster catchers and the endangered hooded plover that choose to nest in the tiny scrapes they make in soft sand. Instead of limiting themselves to the hard sand close to the watermark, people and their dogs trample all over the beaches. It’s possible to stamp on a nest oblivious to what you are doing. ‘You may think your dog is doing no damage, but these nests are hard to see.’ And dogs, he emphasised, run all over the beaches. ‘It’s bad enough when they’re leashed. They still scare birds away.’

He told me about the annual gull count that is run over the June long weekend and includes the Derwent River.  On Bellerive Beach, for example, ‘there’s a veritable passeggiato of dogs and their owners and so there’s no chance for a bird to make use of it’, he said.

I began to feel uneasy.  I have two beautiful canine companions, fellow adventurers where their presence is allowed. I thought of all our lovely beach walks. It seems to me that even people walking quietly and carefully down a beach with no dog at all disturb birds and even scientists monitoring or researching bird behaviour and lifestyles have that same effect no matter how careful they try to be. Birds nestled over their eggs leave their nests, for instance, when they see that most dangerous of all mammals (us) looming, albeit with a scientific title. But mostly I was thinking about the consequences for me in raising my awareness about this issue. My dogs! The beach! Were they two incompatible loves? And what was more important? Shorebirds, or the delight of seeing my happy dogs enjoying the surf?

‘And boats too,’ I said with a heavy heart.

‘Yes,’ he said. And he told me about a particular reserve on the Derwent River, a little one, just a handful of hectares. He’d recently gone there to do a survey and he explained how its done. You spend twenty minutes on each hectare noting the birds you see and hear. ‘That’s how the atlas [Bird Atlas of Australia] was done, right across Australia. But in those twenty minutes there was a jet ski out on the river in front of me, jets from the display squadron from the RAAF – two went up the river, a helicopter going up the river, a fixed wing aircraft directly overhead at low altitude, there was big earthmoving equipment on a block just up the road from me and somebody was using a brush cutter the whole time I was there. So how am I to rely on my ears to do the survey?’

And, I wondered, how do birds communicate against so much mechanical volume.

I walked out of that shop with a lot on my mind. Shorebirds are up against our way of life. To be a migratory bird travelling the Asia-East Australian Flyway the odds are getting steeper. Will there be water in a particular wetland or will  a new housing development have put paid to that refuge?  Will weeds have covered your burrow or stifled a food source when you arrive? And let’s not even talk about hunters.

It seemed to me that if I was going to walk the birds’ beaches then I had to do it with even more care, in a way that gave more than it took.  But how?

I tried to think of communities that live with restraint. Apart from the locals of North Sentinel Island, denizens of the deep Amazon or the San still sort of clinging to a Kalahari lifestyle, I could only think of the Amish.

But on the bright side, a friend  is elated to discover that ten Little Black Cormorants have come to hang out with the Pied Cormorants living on Cormorant Rock off her home (see here).

And on a really world changing scale, Boyan Slat, a teenager from Holland, has come up with an idea, now crowdfunded, backed by the scientific community and at pilot study stage, for cleaning the oceans of plastics within a ten year period. Impossible? His Ted Talk is here.  See what you think

More About Gulls in Hobart

Seagulls and the Sorell causeway