When someone you love says ‘Meet me in Tokyo,’ the temptation is just too great. I put my blog aside, abandoned social media and headed out into the world on a small adventure that involved food safaris, onsin challenges and meditative pilgrimages to shrines, both Shinto and Buddhist.  In Kyoto the leaves were turning.

We took up residence for a while in Asakusa, an old part of Tokyo, where the Sky Tree towers over an already tall city and the Asahi flame, such as it is, lies heavily on its side beneath it. We were close to shrines, big and small, that honour the Bodhisattva Kannon who is intimately linked to the Sumida River.  The story goes that back in 628 AD when the area was a delta, three fishermen hauled a statue of this particular Bodhisattva out of the river.  The first shrine was made of straw.  Now there’s a complex of wonderful shrines, including Tokyo’s biggest and most visited.

The gift of the Sumida River hasn’t saved it from all sorts of atrocities.  It may know daylight but it has concrete hips. There’s minimal habitat for river species. The Derwent in comparison is a wild eyed hippie, a moody and creative artist with a flare for change.

I didn’t notice anyone fishing in the Sumida and barely a bird apart from a lone cormorant and a tiny flock of seagulls that flew into sight beneath a bridge. In fact, with a bridge literally every kilometre along its length there’s not much river traffic either because the bridges are so low. 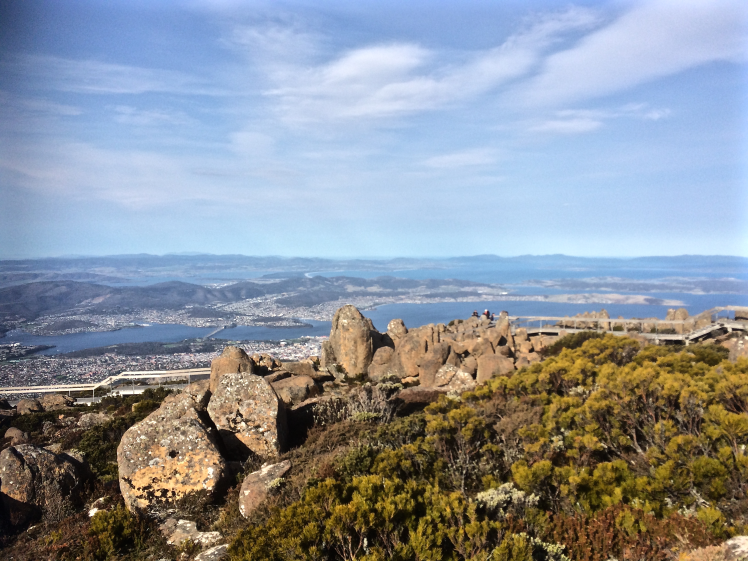 Flying back into Hobart is a beautiful experience – that first riveting sighting of the mountain and that most magnificent of rivers, always so spectacularly stunning from the air, is riveting.

Once my feet were on the mountain and my eyes on the river, I felt reconnected to home, ready to curl my hand around the tiller, jump on my bike, lug my kayak down to the water or take another stroll along the coastline somewhere.