Tasmanian Beaches of the D’Entrecasteaux Channel

I’d planned to limit myself to the Tassie mainland on this blog, but if you have feet, a bicycle, a kayak or a yacht, Bruny Island’s beauty exerts so strong an allure that it’s impossible not to acquiesce to it. And so, just as I’ve allowed myself to be distracted from the coastline by rivulets, the Derwent River and its beaches, I’ve done it again. Bruny, a substantial part of the D’Entrecasteaux Channel, as its name implies, just has to be included.

Of Waterways and Islands

The D’Entrecasteaux Channel, or ‘The Channel’ for short, is a magnificent but fickle waterway – just ask any sailor. It feeds into the Derwent River and is separated from Storm Bay and the Tasman Sea by long, thin Bruny Island, making it a sheltered waterway, a definition it is keen to dispute, because stormy weather can make sailing it an adrenaline pumping experience on dark, wind fuelled nights when it whips up waves and gales gather strength as they hurtle through the tunnel formed by the island and the Tasmanian mainland. On calm, sunny days, it’s a completely different experience. Light breezes might arrive from unexpected directions and you may be rewarded by visits from penguins or dolphins as you enjoy the views, all sails up.

The island’s original name is Lunawanna-allonah, named by the Nuenonne, who over thousands of years came to know this island intimately. Its name is so musical and redolent with eons of past history that I wish we’d restore it.   Instead, it was given a pseudonym; named again after Bruni d’Entrecasteaux, who visited in 1793 and made some judicious observations about the coastline.

This island off an island off an island, apart from being much loved because it’s so undeveloped, ensures you never go hungry. As you cycle along you can stop for coffees, buy local cheese and wine, make a meal out of the oysters farmed offshore or fill your pannier bags with local fudge and cherries. The population on Bruny is small and seems smaller still because so many properties are tucked away behind hills and forests. What you particularly notice if you are sailing, is that Bruni D’Entrecasteaux was right; there are stunning anchorages, and these are often bays within bays.

There are also coves and headlands and although on the D’Entrecasteaux side of  the island the beaches are low energy, on the ocean coastline the surf gets up. On the channel side it’s adorned with islands (Satellite and Partridge) and on the outside it has The Friars, part of the Actaeon Island Group, a popular haul out for seals. It also has a beautiful peninsula with a fabulous name – the Labillardiere Peninsula, which lies within the South Bruny National Park.

It takes the best part of a day to cycle around North Bruny and longer for the south. The ride takes you past quiet bays (like the Duckpond and North Simmonds), Dennes Point with its jetty and Nevada beach, which has beautiful cliffs at the southern end, and then, if you choose the ocean route, it’s up a climb from where you can look out over Bull Bay and across Storm Bay to the Iron Pot lighthouse in the Derwent, to Betsy Island and Frederick Henry Bay, and further to the east, Norfolk Bay and the Tasman Peninsula. It’s a long time since I did this ride, but it was unforgettable and these days there are bicycles for hire, which makes it that much more accessible to cyclists.

More recently we sailed into Bull Bay, then explored the coastline a little way south, getting a feel for Samos’s liking for a big ocean swell. Getting the view from water level as opposed to high up a hillside felt a privilege because you need a boat to enjoy this otherwise hidden perspective.

North and South Bruny,  362 sq km in all, are tied together by an isthmus (the ‘Neck’), home to penguins and shearwaters, and sitting out on the dunes beneath the moon and stars, watching them return home is exhilarating. The ocean beach is lengthy; I’m looking forward to walking it. The channel beach is quiet with vast stretches of sand exposed at low tide and limitless shallows on the high, making it popular with waders of the avian variety.  The road across is a narrow strip at the base of the dunes and there’s not height separating it from the beach itself.

It’s definitely worth stopping to climb to the viewing platform because the sight of the isthmus and the coastline beyond is mesmerising. 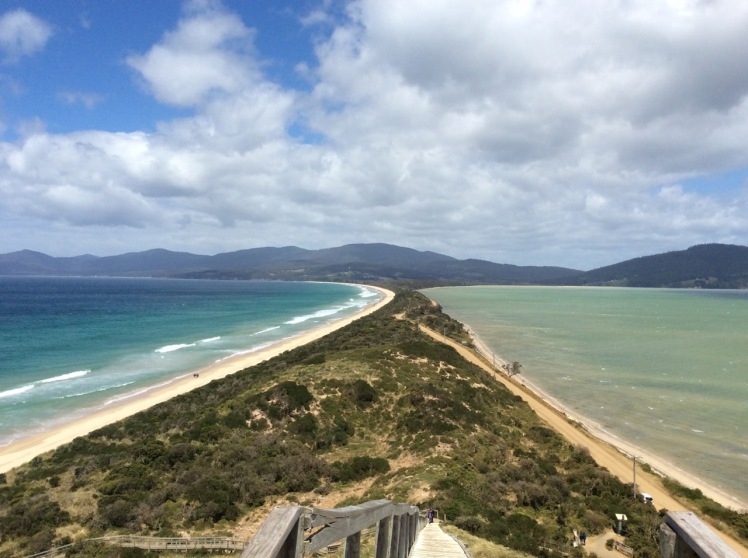 From the ferry, it’s a longer cycle around South Bruny Island and as you head down North Bruny towards the isthmus it’s worth taking a break at Great Bay to sample the oysters and cheese before you reach the isthmus.

South Bruny is the larger end of the island and if you keep heading south down the quiet road, your bike ride will take you to a T-junction. Cycle to the left and you’ll reach Adventure Bay with its rich exploration and whaling history.  It’s a picturesque choice.  There’s a lovely beach walk to be had, the opportunity to take a boat trip to The Friars (I did this as an annual pilgrimage before getting my own boat) and  there’s another lovely walk out along the headland with its whaling history and the opportunity to encounter a white wallaby or two.  Bruny is rich in wildlife.  At night it’s a kindness to travel as slowly as you would in a national park – 40 km, IMHO.

Cycle to the right and more vistas will open up as you ride through a number of tiny communities, like Lunawanna and Alonnah. It’s a steep ride up to the lighthouse with its fantastic views. I haven’t actually ridden up there, but the views are definitely worth the uphill haul. Alternatively, there’s Cloudy Lagoon and vast, wild Cloudy Beach, and the Labillardiare Peninsula. Or hoist a tent at Lighthouse Jetty beach with its more protected waters.

It’s a lovely but brief kayak trip from Tinderbox on the mainland to Nevada Beach at Dennes Point, but you can kayak across from any point on the mainland side of the Channel, depending on the type of distance and conditions you’re up for.  If you possess courage, stamina and kayaking expertise, you could consider  kayaking the Bruny coastline in a day – or go the whole hog and kayak the entire coastline of Tasmania like these kayakers did.

I visit the island mostly by yacht these days, with a kayak on board.  It’s a great way to explore stretches of coastline that would otherwise be inaccessible.

Here’s a creation story from the Nuenonne of Lunawanna-allonah and here’s more info on Bruny Island.