Small Adventures Exploring the Coast on Foot, by Bicycle, Kayak and Sail

Sundra and I had decided to walk from Lewisham to Dunally and for these walks her best friend, Matisse, invariably came too.  Despite his venerable age he always kept up with us and chose to stick with whoever might be lagging, although sometimes he’d set off alone to find a different way around an obstacle.  And ever polite, he accepted us picking him up and passing him over hazards he couldn’t manage alone.  He’d pick up his dignity and continue lightly finding his way.

Long ago I met a writer who lived at Dodges Ferry. It was considered an odd choice by my friends, all better acquainted with Hobart than I was at that time, but walking this area I realised the writer was prescient. Its proximity to  vast Pitt Water Lagoon, quiet coves, a string of sheltered beaches, a magnificent headland, beautiful surf beaches and a photogenic river give it an enviable natural richness.

Lewisham consists of a thin string of houses that extend along the eastern shore of the inner entrance to Pitt Water Lagoon just north of Dodges Ferry and so it isn’t physically on Frederick Henry Bay although its watery landscape is intimately connected to the bay.  It strikes me as an under rated place, perched as it is above the water with access  to some lovely beaches via a rambling path.

Dodges Ferry and Lewisham probably don’t want their natural wealth proclaimed to the world less the financially obese rush in and take over.  For the moment laid back Dodges in particular still has enough shacks and rutted roads to keep it feeling like an authentic holiday village.

It’s about a 35 minute drive from Hobart to Lewisham and Dodges Ferry and it’s rich with water views  if you choose to take the Lewisham Scenic Drive turn off.  It’s my firm belief that one should always take the scenic route and  for this series of walks it was such a no brainer that without fail we did.

There’s a boat ramp at Lewisham and moorings offshore, and the spit that is Five Mile Beach with its bright white dunes  backed by pine forest forms the opposite shore.  Water flows in and out of the lagoon to Tiger Head Bay and larger Frederick Henry Bay through a narrow channel at Sandy Point on the Five Mile side and Dodges on the northern, and responds to the lay of the land by swirling and rippling in interesting ways.

After considerable discussion we began our walk at the boat ramp and chose to go boulder hopping in preference to taking the path a sailing friend had told me hugged the shore.  Sundra’s miniature poodle, Matisse, hopped from one lichened rock to the next with a grace and dexterity that belied his venerable twenty something years.

The lichens, in various hues, indicated the highest reach of the tide. 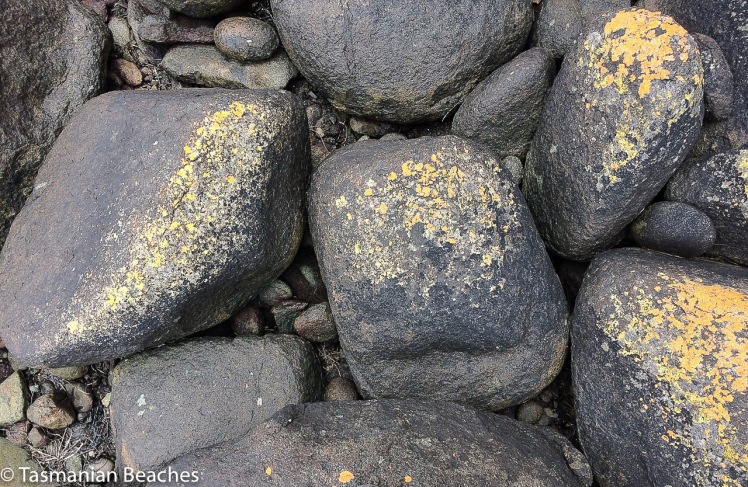 As well, there was dolerite weathering in interesting ways.

Eventually we climbed up to the path and discovered that one of the particularly  enjoyable aspects of this walk is the number of boat houses tucked into the cliff, each quite idiosyncratic.  Boats lie about on the shore, silently emanating the richness  of their mysterious lives, and jetties are also stop-and-enjoy features along this varied track.  Just like on the Derwent and the D’Entrecasteaux, casuarinas (she oaks) fringe the shore, providing light shade and there are three or four ‘covelets’ depending on how you want to define stretches and pockets of sand divided by man-made features or natural indentations.  Where these exist, so do the boat houses, which in many cases look to be tiny weekend beach shacks.

The path led us  to a beach that a passer by told us was called Lewisham Beach. Sundra was struggling to pronounce the word ‘Lewisham’ and so we agreed that we’d call it the Hamlet of Lewis, which made the place feel pleasantly foreign. I’d thought this particular beach was called Okines but one thing I have discovered about walking beaches is that both they and their names can be transient and confusing.  Sorell Council refers to a Lewisham and an Okines Beach and they should know.  Short (2006) doesn’t reference a Lewisham Beach.  I expect they simply segue into each other and did so without us noticing.

As the tide receded the landscape transformed into vast stretches of sand  interleaved with shallow fingers of water, leaving a deep channel over on the Five Mile Beach side of what a little earlier had been a single stretch of water.   A few groups with fishing rods  had strolled over there  and tiny clicking noises emanated from the entrances of a million tiny tunnels as the more permanent inhabitants of this  sweep of fabulousness, the soldier crabs, began popping up everywhere and marching off together across the watery stretches of sand like endless pink ribbons.  It was hard to find any vacant land on which to place our Gulliver-like feet. 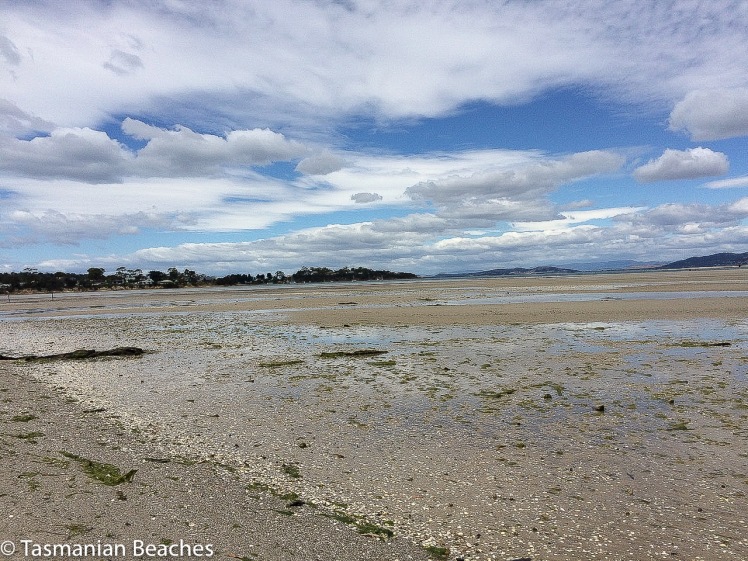 We looked at the ripple marks in the sand, practising our reading of tide and current. There were other clues to the life of the beach.  Groins indicated local concern about beach loss and the wrack line showed that this was valid.  It was right up against the base of the dunes and we wondered whether the marram grass and the houses themselves had affected beach replenishment.  Sundra exchanged pleasantries with a landowner industriously chucking branches down to the base of the dune to join the others strewn there in an effort at holding back the weight and determination of water.

We met some walkers who told us they’d seen a large fish head with a protruding tongue and odd curls on its face and although they told us where to find it we never encountered it, just a hoard of jellyfish patiently waiting for wind and water to carry them back out to sea.

Sometimes the weather and a beach are so compelling that it pays to dawdle and lose yourself in the interesting lives of crustaceans, invertebrates, boulders and curly faced strangers from the watery depths.   We idled and we lingered until at last we reached the rivulet.  We had taken hours, but Dodges Ferry and Spectacle Head were still simply a distant view. and so we agreed we’d come back  on the next good low tide.

I discovered a little  history on the Southern Beaches Historical Society website.

There’s a natural spring and a wetland behind the beach, which would have once been handy for the Moomairemener who had been pushed out of their country by the time Ralph Dodge, born on Norfolk Island (and one of the group of settlers who came to Van Diemen’s Land in 1807/1808) was granted this land in 1864.  He and his wife Charlotte called it Lagoon Farm and in time it passed to their youngest son, Robert, who with his wife Harriet raised nine children here, before selling the farm to the Crown for the new Soldier Resettlement Grants Scheme that was set up for the soldiers back from World War I.

Ernest Okines was the lucky recipient and as with many beaches the foreshore’s name became linked to the owner.  Today the Dodges Ferry Primary School stands on this land – the old homestead was demolished in the 1990s.