I left Wingana behind me and drifted on down the bay, feeling elated.  I was discovering coves that weren’t evident from the road.  Their beaches were private affairs, apparently enjoyed only by the people living in the houses directly above them and given that the tide was high, they were merely thin lines of sand, often covered in the red seaweed I’d seen earlier and sometimes there was no beach at all, except that I’d be floating over expanses of sand that on the low tide were probably exposed.  In one small cove a pair of horses stood staring at me. I passed a green shack and glided over its beach. I paused beneath a house on a cliff to inspect the rocky shoreline.  There was a party happening up there and they had no idea I was drifting along savouring their bay.  In the water  tiny fish were jumping and the grey heron that had been leading me down Ranggoerrade flew off again as I drew closer.

I loved discovering boat sheds along the edge of the bay.  I hadn’t realised there were quite so many. 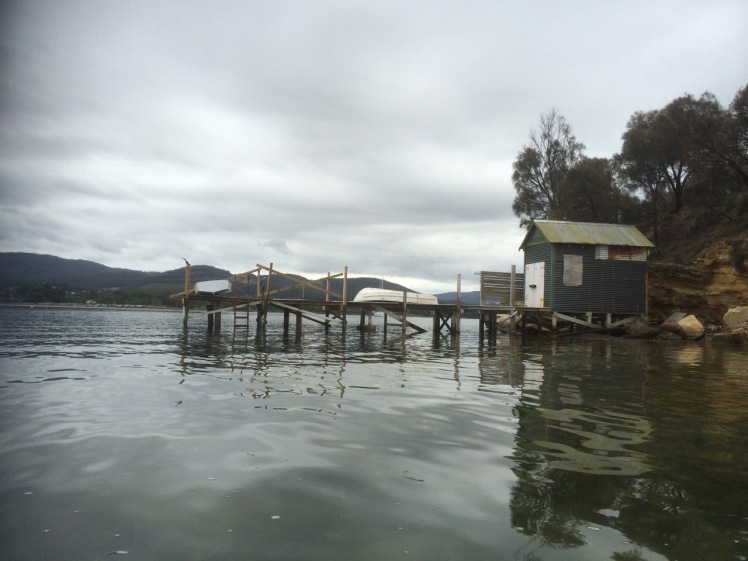 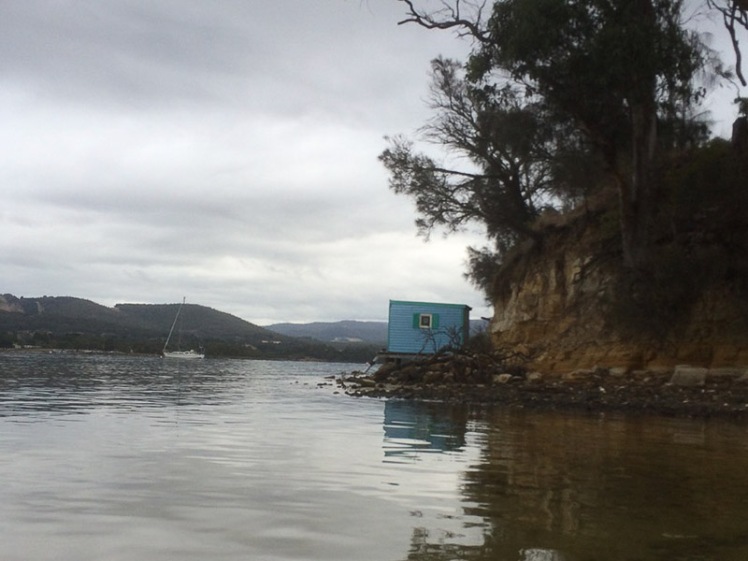 Around 10.30 am I came to a change in the cliffs. They looked, to my ignorant eye, to be a dolerite intrusion and I discovered a picturesque grouping of boat sheds close by. 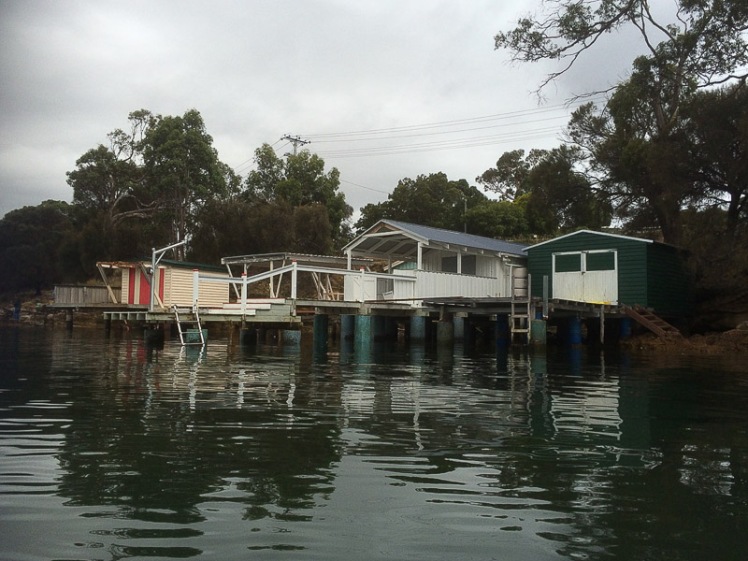 I was now nearing the moorings and a man, knee deep in the water, had one hand on his tender, and was about to head out to his yacht.  He greeted me, and that was the start of a long, interesting boating conversation.  It turned out we belonged to the same sailing club and that we both had Catalinas. It turned out that unlike my local, small scale adventuring, he had just returned from cruising the Pacific. We talked about yachts and our boats’ pointing capabilities.  We talked about the bay and the midweek races and then I kayaked away towards the next cove.  ‘Perhaps I’m getting close to Stinkpot Bay,’ I was thinking, when I was actually right in the middle of it, wondering where I was, and looking up at a house I should have recognised instantly.  It just goes to show how different a place can seem when you approach it from the water… and when you are thinking about what it would be like to cruise the Pacific yourself.

Stinkpot is a bay with character and its shared by three houses.  A small rivulet flows into it and the beach seems to be uncertain as to whether it wants to by sandy or muddy.  This makes it popular with crabs, who walk it on quietly clicking legs,  but difficult for humans to avoid squashing the inhabitants in their underground bunkers.

There’s a short walk from the road to Stinkpot Point.  It’s all of 5-10 minutes, but once you’ve sat on the rocks at their furthest extent, it’s easy to become transfixed for a long, long time.  The sandstone cliffs show off their beauty here too and the view of the moorings, the bay and the surrounding hills is pretty idyllic.  As for how it got it’s name, Placenames Tasmania records it to be ‘from the smell of rotting seaweed.’  But Stinkpot is also a term of endearment and an alternative name for the Southern giant-petrel, and as it’s definitely a stinkpot if you’ve grown up here and that lovely bird is having a hard time of it when it comes to long-line fishing and the ingesting of plastics, I prefer a combination of both these alternative facts when it comes to this particular Stinkpot’s nomenclature.